The Columbus suburb is known as a destination for outdoor recreation. Here are five spots to check out as the snow begins to fly. 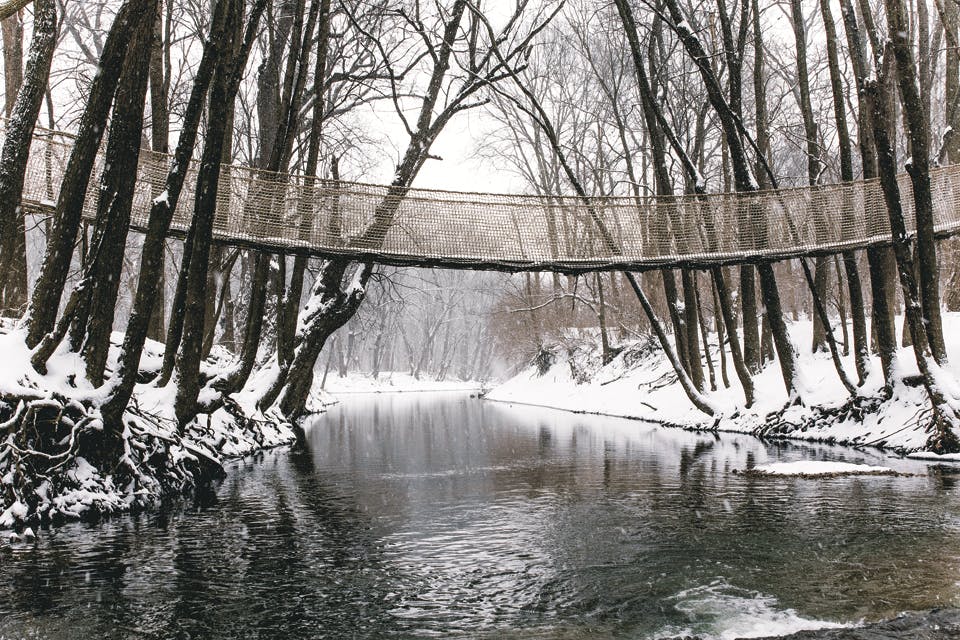 Scioto Grove Metro Park: The Scioto River serves as the eastern boundary of Scioto Grove Metro Park’s 620 acres. The park is home to over 7 miles of trails, making it a great destination for those seeking a winter hike or run through the woods. One of the most popular routes is the 1.8-mile REI River Trail, which leads from the northern section of the park to its southeast corner and features a suspension bridge that takes hikers over the waters of Grant Run. In addition to hiking and running, Scioto Grove is ideal for winter bird-watching. Species spotted here during the colder months include ducks, red-tailed hawks, Canada geese, osprey and eagles. For birding in the winter, park ranger Geoff Hamilton recommends the REI River Trail. “That trail in the wintertime is one of the best places to find waterfowl, because the Scioto River is kind of like a flyway,” he says. Scioto Grove also has a sledding hill, which is popular during winter weekends. There are additionally two archery ranges open year-round and a field where the use of drones is permitted. The entire park is pet-friendly, too. Just make sure your dog is well behaved and on a leash. 5172 Jackson Pike, Grove City 43123, 614/949-1078, metroparks.net

LVL UP Sports Paintball Park: You may not think of paintball as a winter-season activity, but at LVL UP Sports Paintball Park, you can enjoy the sport year-round. “It brings out a very cool, unique element to the game, but the game itself doesn’t change,” says Dave Pando, owner of LVL UP Sports. The attraction, which opened in 2016 and covers 36 acres, is the newest and largest paintball park in the Columbus area. It’s also home to the biggest playable paintball castle — a 2-story structure with 100-foot-long walls — in the Midwest. The nine different playing fields (referred to by those who play as “maps”) include a 6-acre woods, a Tiki-themed playing area and a 250,000-square-foot field featuring three full-sized trailers that players can incorporate into their matches. Private games can be scheduled any day of the week or simply walk up for open play every Saturday and Sunday. 5390 Harrisburg Pike, Grove City 43123, 614/313-1382, lvlupsports.com

Battelle Darby Creek Metro Park: Battelle Darby Creek Metro Park is the largest metropolitan park in Ohio, with more than 7,000 acres of native restored prairies, wetlands and forests. The park spans over 13 miles along the Big and Little Darby Creeks and features over 22 miles of hiking trails plus a section of the Ohio to Erie Trail, a system that connects Cleveland, Columbus and Cincinnati. One of the big draws is the park’s herd of bison, which roams within enclosed pastures as a nod to the fact the animal once lived here. In the colder months the bison can be seen from the nature center on their winter pasture, sayssenior naturalist Debbie Ruppersburg. “They are a lot easier to see in the wintertime than during the summer, when they would be up in the prairie and the grass is so tall you can’t find them,” she says. Any of the park’s trails can be used for cross-country skiing when conditions allow. Other outdoor activities include a sledding hill and an ice skating area. Winter visitors can warm up inside the Nature Center, which features displays and interactive activities for families, including a 53-foot-long living stream that’s home to fish and aquatic life you’ll find in the Darby creeks. 1775 Darby Creek Dr., Galloway 43119, 614/875-7350, metroparks.net

Kickmaster Athletic and Event Center: Footgolf, a fun sport that mashes up soccer and golf, is usually thought of as a summer activity. But at Kickmaster Athletic and Event Center, players can hit the course year-round. As the first dedicated footgolf course in the United States, this nine-hole course offers gameplay ranging from informal matches to competitive tournaments. “We don’t just reach out to soccer players. Players range from grandparents to parents to kids at the age of 5 that come into our facility and have a great time,” says co-owner Bob Clanin. He says the winter months make for an especially unique footgolf experience. “When snow falls, we try to have a winter tournament,” he says. “We break out vibrantly colored balls, which makes for a really unique and fun time.” Beyond the outdoor footgolf course, Kickmaster Athletic and Event Center has a 10,000-square-foot indoor facility that’s home to turf fields, batting cages, rock climbing, zip lining and more. There’s also a 3,000-square-foot clubhouse. 1700 Dyer Rd., Grove City 43123, 614/595-8659, kmeventcenter.com

Fryer Park: Located on the southern side of Grove City, this 110-acre city park is a great destination for nature-related activities once winter arrives. About 20 acres of the park consist of woods, which offer glimpses of various wildlife species. “We have different bird boxes and bat boxes around the park, and those attract a lot of wildlife,” says Kim Conrad, director of Grove City’s Parks and Recreation Department. “We’ve seen a lot of foxes and deer and, of course, in the winter it’s so much easier to see them.” The park offers a few short trails for visitors to walk, including a mile-long paved path and several mulched paths that lead through different wooded sections of the park. The main attraction this time of year is Fryer Park’s sledding hill, which can be enjoyed by visitors of all ages. Other attractions include a playground and a small pond that offers additional opportunities for winter wildlife settings. Fryer Park is also home to Century Village, which depicts a town of the late 1800s. It has regular hours during warm-weather months, but is open by appointment year-round. 3899 Orders Rd., Grove City 43123, 614/277-3050, grovecityohio.gov

July 7th is "World Chocolate Day!" “All we need

"Altogether"..Our City, Our Chamber, and Our Heart

So excited to get this "Exclusive Sneak Peek" of t

Fireworks and Pet Safety 🧨🎆🐶🐕 Did you

It was a beautiful morning to join others as they

We want to see YOU in Grove City TOMORROW for the